SR is hosting an alumni event where you will get the chance to listen to and discuss various interesting topics with our wonderful alumni! It will take place on Tuesday, February 8th, 17:30 - 19:00 in T3-02 or online. Interested? 🤔 Don’t miss a chance and sign up through the following link:forms.gle/zWVeF9YaCL7CwGX18 P.S. There will be pizza afterwards!🍕😜Read more about our alumni:⭐Dolly⭐ was the Programme Advisory Coordinator of the SR Board in 2017-2018. She studied IBA (BSc) and Global Business & Sustainability (MSc) at RSM. Now she is working as an Innovator Analyst at Fashion For Good.⭐Isabel⭐ was the Chair of the SR Board in 2017-2018 and is now part of the SR Supervisory Board. She studied IBA (BSc), Marketing Management (MSc), and Human resource management (MSc) at RSM. Currently, she is a Corporate Recruiter at TOPdesk.⭐Evert⭐ was the Marketing & Events Coordinator of the SR Board in 2017-2018. He studied BA (BSc) at RSM, Global Strategic Management (MSc) at ESADE, and Global Commerce (MSc) at the University of Virginia. Currently, he is part of the International Talent Programme at ING. ... See MoreSee Less

🔴PROFESSOR AWARDS 2021🔴We are honoured to present the Professor Awards 2021! Similar to last year, this event is pre-recorded and all professors, supporting staff and students contributed to make this video possible! This year’s theme is “Moving Forward”. We hope you take the time to watch and support the nominated and winning professors of 2021! ... See MoreSee Less

🔴FINAL VOTING PROFESSOR AWARDS🔴 Join us for Professor Awards 2021 on Thursday, May 27 on our Instagram and Facebook! The time has come for you to honour the BEST professor of each year and final voting takes place now! VOTE NOW! www.rsmsr.nl/professor-awards-2021/ ... See MoreSee Less

🔴🔴ONLINE PUB QUIZ🔴🔴Do you want to meet new people at RSM? Feel the need to kick back, relax and enjoy yourself? We have the perfect online event for you!Together with Prof. Madertoner, SR will be hosting an online pub quiz open to any RSM student! All participants have the chance to win a special online escape room voucher. Get to know your fellow students in an informal and interactive environment on Thursday, 29 October at 6PM CET! Link below to sign up for our event now! chat.whatsapp.com/B6eS8pcWUm12hPgFRNuaQ3 ... See MoreSee Less

[two_third] SR Around The World is a new initiative of SR sharing the international experiences of our members and spreading the motto SPEAK YOUR MIND throughout the globe.

SR members who take pictures of themselves with their SR hoodies in special places will be featured here to share their personal story.
Where did you go? Who with? Why did you go there? What did you do? What was special about it? How do you feel about it?

So now it’s up to you! Grab your hoodie, book your ticket, and bring SR Around The World!
[/two_third] [one_third_last] [responsive]

This beautiful background is of my even more beautiful and lovely hotel in Marrakech, Morocco. This picture was made in the year before my board-year.

I was here with three friends of mine on a citytrip in april 2013. To finish the hard end of every academic year we always go on a citytrip to make sure we make it till the end. Of course it was a little warm to wear the sweater in the day with such a lovely weather but in the evenings it became colder so the sweater was actually nice to have with me!

Marrakech is a chaotic place where I saw things I had never seen before. On the big square next to the souks there are dentists who will pull your teeth for 6 euro, cobra’s monkeys and a lot of drinks & snacks!Marrakech is a place where you need to have been once in your life! When you go there: go to restaurant Pepe Nero, It is beautifull, the food is delicious and you will be treated like a royal!
[/two_third_last] [hr style=”3″] [one_third] [responsive]

This picture is from my exchange to Melbourne, Australia (2013). It is taken in Apollo Bay, one of many great places to surf along the Great Ocean Road. Surfing, combined with snag barbies (sausage BBQ) and a bag of goon, is a great way to spend your weekend here.

Melbourne is a cultural diverse city, with its Central Business District, China Town, Victorian styled suburbs and beautiful parks surrounding the Yarra river. Although going out is somewhat pricy compared to the going rate of a beer in Rotterdam, there is always a student pub having happy hour to spend your evening at with your mates from the international student community.

The education system at Uni is very much discussion based. As such considerable debates will be held not only during tutes, but even during lectures. With free barbies hosted by the numerous student clubs at lunch, life’s good. No worries!
[/two_third_last] [hr style=”3″] [one_third] [responsive] 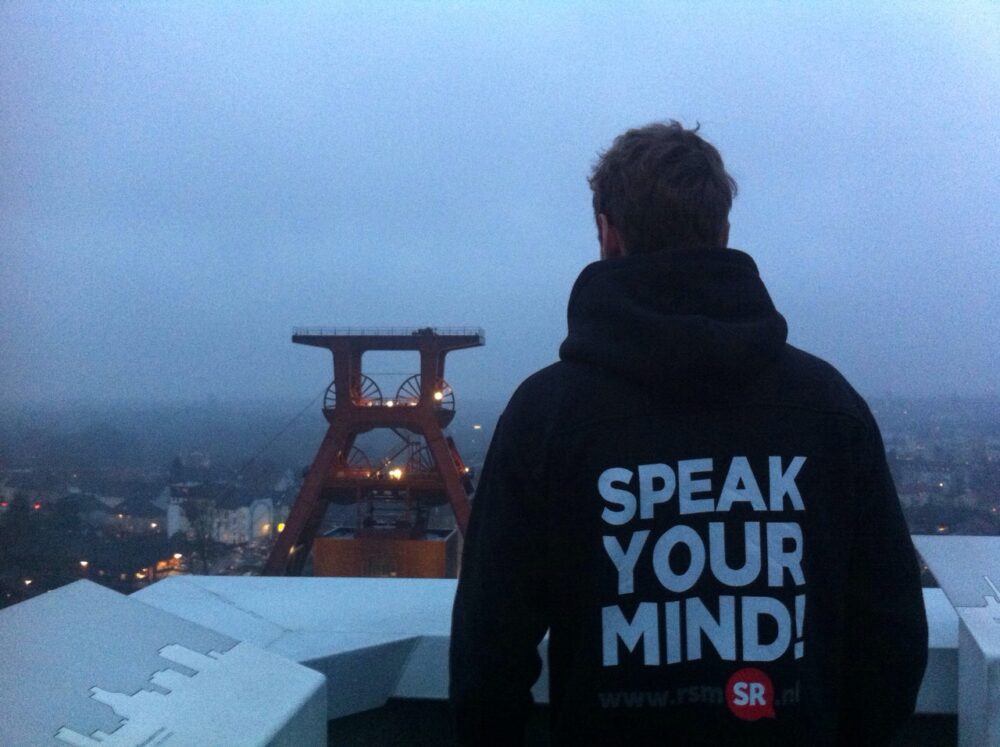 Even though life as a student is sometimes hard and definitely the final exams can be rather stressful. However as a second year IBA student the reward is big, three and a half weeks of christmas break! Especially after a very busy first trimester with SR, the break was for me almost desperately needed. Not wanting to spend the entire break at home I decided to get in touch with a good friend and classmate I met in Beijing who currently lives in Essen. Being from Brazil the chances of meeting him after the few months we spent together at EF Beijing studying Mandarin were rather small. But some people are true global citizens and this Brazilian guy is currently doing a high school year at a Gymnasium in Essen. What is a Brazilan doing in Essen, you might wonder, which was not unlike my first thought. Of all places you can go to in Europe or even Germany, Essen is not directly the place that comes to mind when you want to visit, let stand live, in Europe. And yes, having visited Essen, I can say that it is an ugly, somewhat boring industrial city that I sure wouldn’t want to live in. However I decided not to judge based on the outside alone, but discover the story behind the ugly post-war buildings.

Essen is located in the Ruhrgebiet, known for its coal mines and industrial character. In the second world war the city has been bombed by the British and the historical city center has been demolished. The city has been built around its industries, but after the mines have shut down the city has had difficult times. However the old factories are now given new purposes, swimming pools, amusement parks, museums, libraries etc. have been built in and around the old mines and factories. The picture has been taking on top of on of the old coal plants named Zollverein, which is now an UNESCO heritage site with museums and restaurants. Much like Rotterdam, Essen is a industrial city bombed in WW2 and is finding its new breath. I is actually worth visiting for a day or two, but living there, nein danke.
[/two_third_last]